In February, the Council welcomed Rick Samimi as a pharmacist practitioner member of the Council.

Rick is a graduate of the University of Sydney and has been a registered pharmacist since 1991. He has completed a Master of Commerce (UNSW) and a Graduate Diploma in Natural Medicines and has been involved with Ahpra and the previous Pharmacy Board of NSW in various capacities since 2003. Rick is currently an Honorary Professional Fellow, Industry Advisory Board member and occasional lecturer at the UTS School of Pharmacy. He is also a member of his local Primary Health Network’s Clinical Council. A past President of the NSW Pharmacy Guild, and past National Vice President of the Pharmacy Guild of Australia, Rick was recently re-elected to the Branch Committee of the Guild in NSW.

Rick has been involved in an advisory capacity in many pharmacy research and implementation projects in the past, most recently in the review of Professional Practice Standards, rewriting of the Code of Ethics in Pharmacy (PSA) and in Design and Implementation of Collaborative Health Models in Australia (PwC). Rick has also held board positions for educational organisations, including as a board member at the Australian College of Pharmacy, and for the not-for-profit Immigration Rights & Advice Centre.

As a pharmacy owner since 1998, Rick currently works in and co-manages three pharmacies in Sydney. Rick is passionate about the expansion of pharmacists’ role in primary care through enhancement of professional services and transformation of community pharmacies across NSW to local Health Hubs. On a lighter note, his lifelong passions outside of his work and family, are music, European football and reading books. 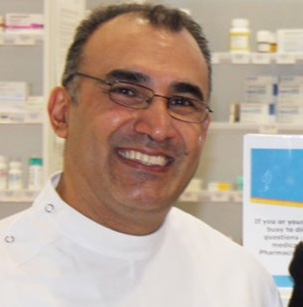